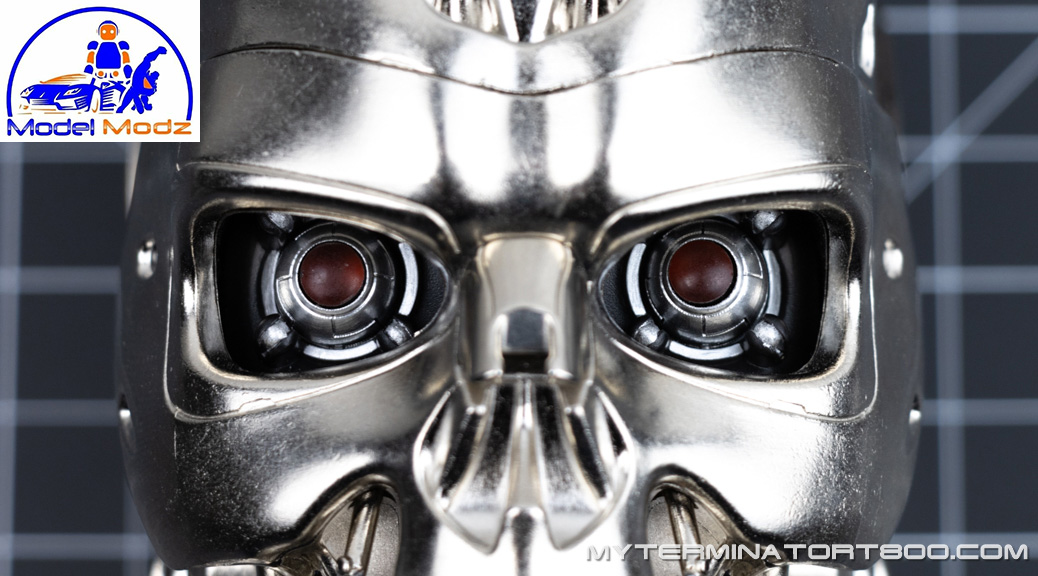 If you have ever found yourself staring into the eyes of your Hachette 1:2 scale Terminator T-800 partwork endoskeleton, you might wonder why they don’t quite match the size of the eye orbits (sockets). You are not alone. This is because the supplied eyeballs are a little too small, and surrounded by black, so they kind of sink back into the head. Even after I added a little silver paint to the ‘clamps’, it didn’t really help much: 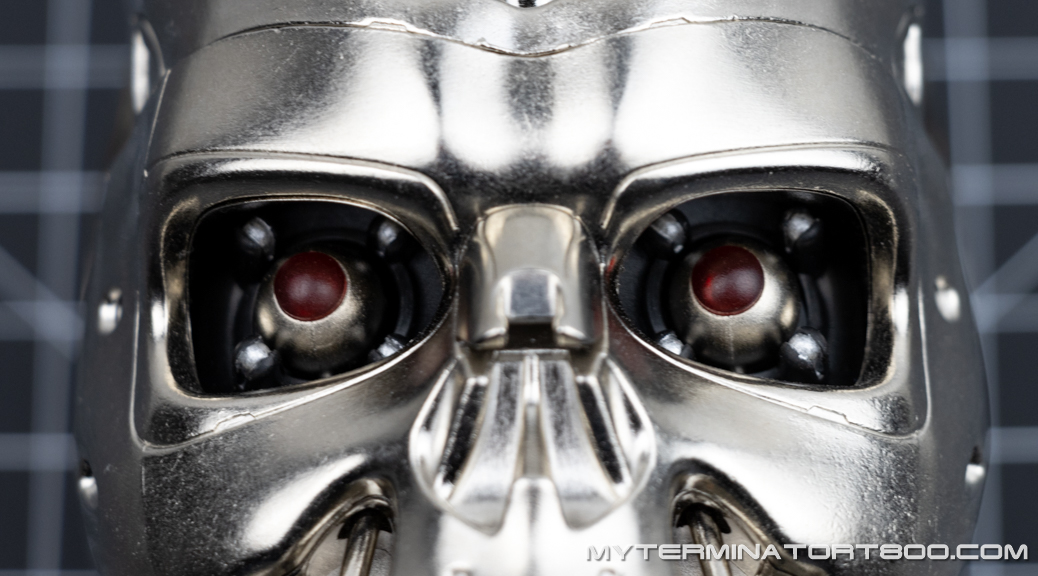 To fix this problem, I have seen a few builders take larger silver balls, drill them and add red acrylic rods in front of the LEDs, and then grind open the sockets to make them fit. This option seemed a little extreme for me, so I was very excited to hear that Corrie and Chloe over at Model Modz have recently released their Replacement Eyes mod! 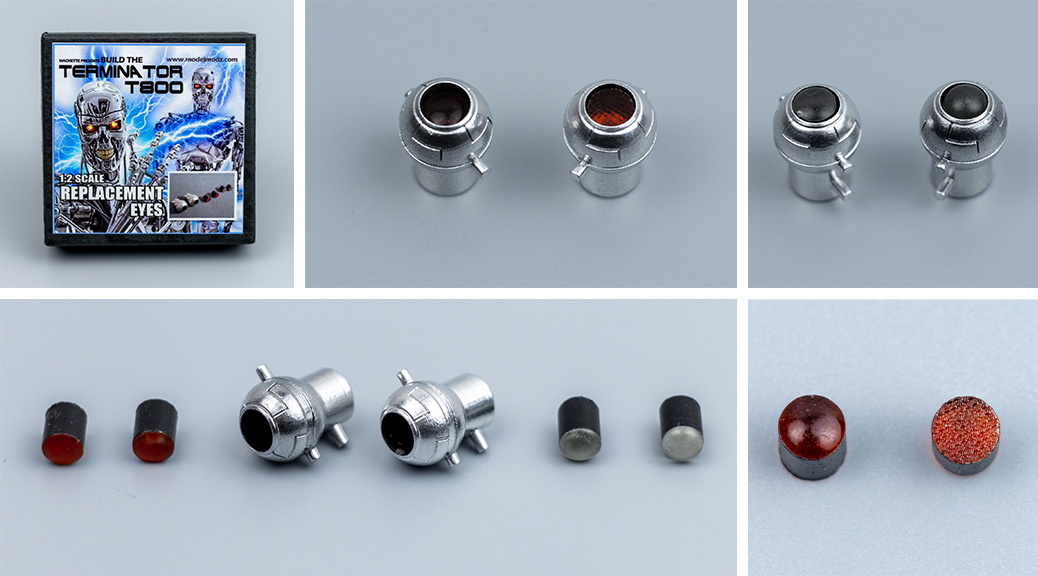 The Replacement Eyes mod includes a pair of custom 3-D printed chrome eyeballs with more accurate detailing than the Hachette ones, as well as two sets of reversible lenses. The red lenses can be used to either expose the outer surface as smooth or with a mesh-pattern (both formats were seen throughout the Terminator franchise). Alternatively, the clear lenses can be used if you do not want the eyes to be red when they are not lit (the LEDs behind these eyes are red, so they will always shine red when powered). I appreciated the various options here and quickly snapped up a set!

My T-800 skull was nearly fully assembled by the time the Replacement Eyes mod arrived (I was up to Issue 34). Therefore, these steps involve taking some of the skull apart. You may also notice the Replacement Teeth from Model Modz have already been installed as well. Many of the first steps are the same, so if you plan on adding the Replacement Teeth to your build, it saves time to do both mods together.

Remove the faceplate by pulling it forward away from the head: 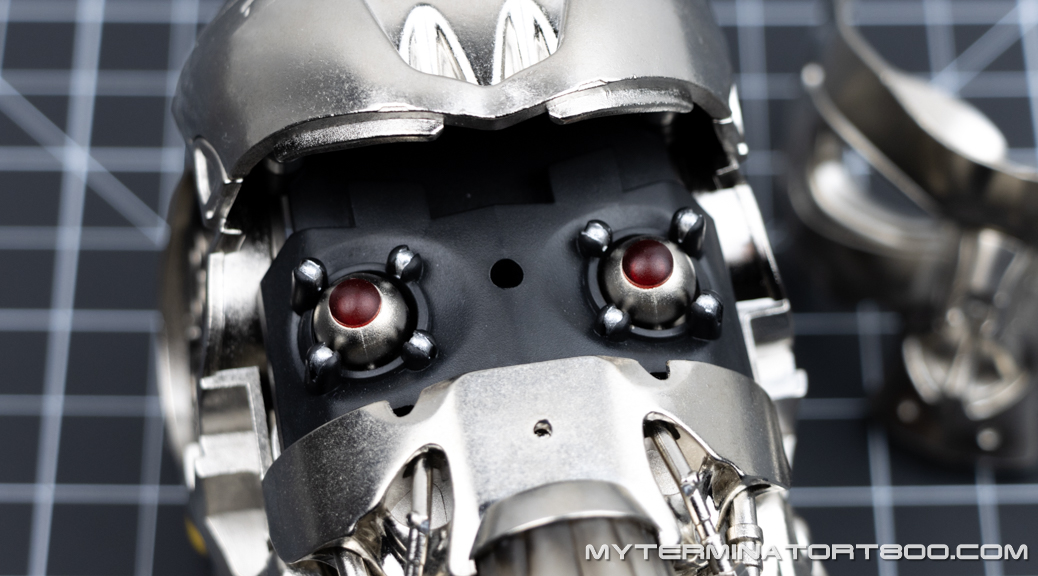 At the rear of the skull, remove these two screws at the base.

We will be removing quite a few screws during this install, so keep track of all of these screws so you can put them back later: 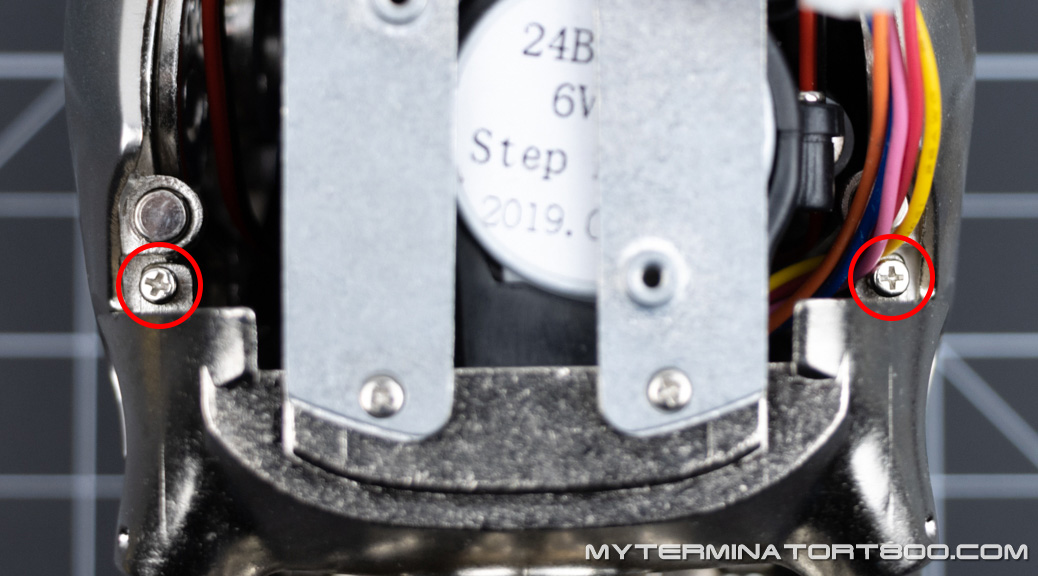 At this point, you should be able to lift the cranium straight up and off the head: 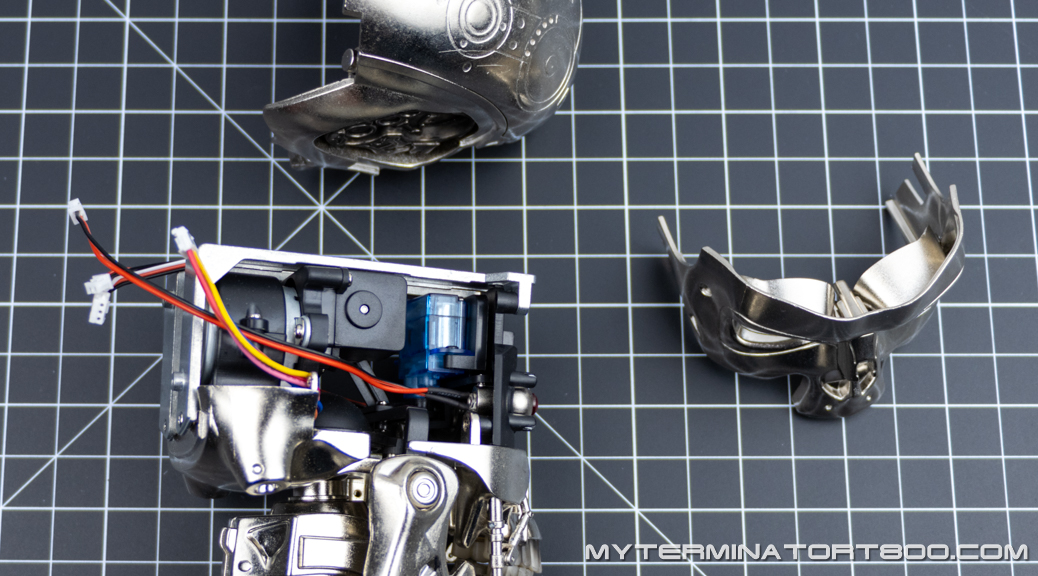 While this step is not required, it will make Step 5 easier. On the left side of the head, slide the slot of Head Motor Joint B up and off the motor pin. This will allow us to open the jaw much farther.

Be careful here, just lift the joint enough to move it off the pin: 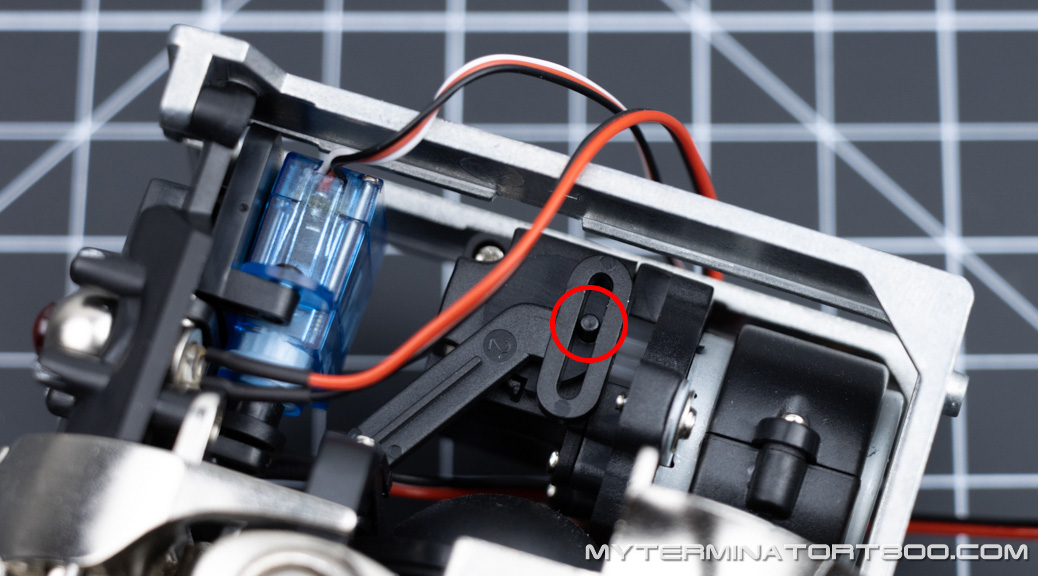 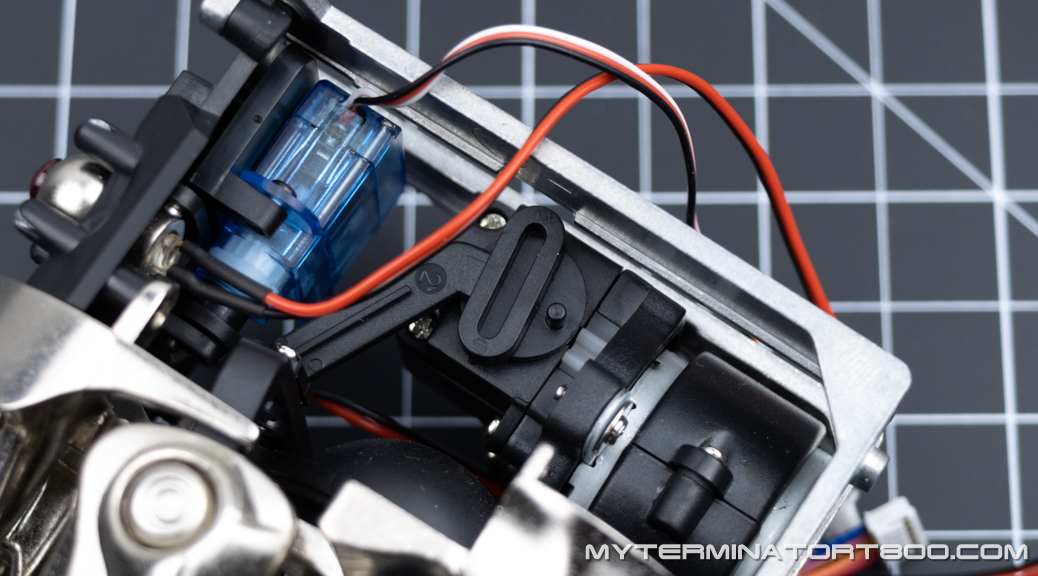 Remove these two screws holding the metal L-brackets to the base of the skull: 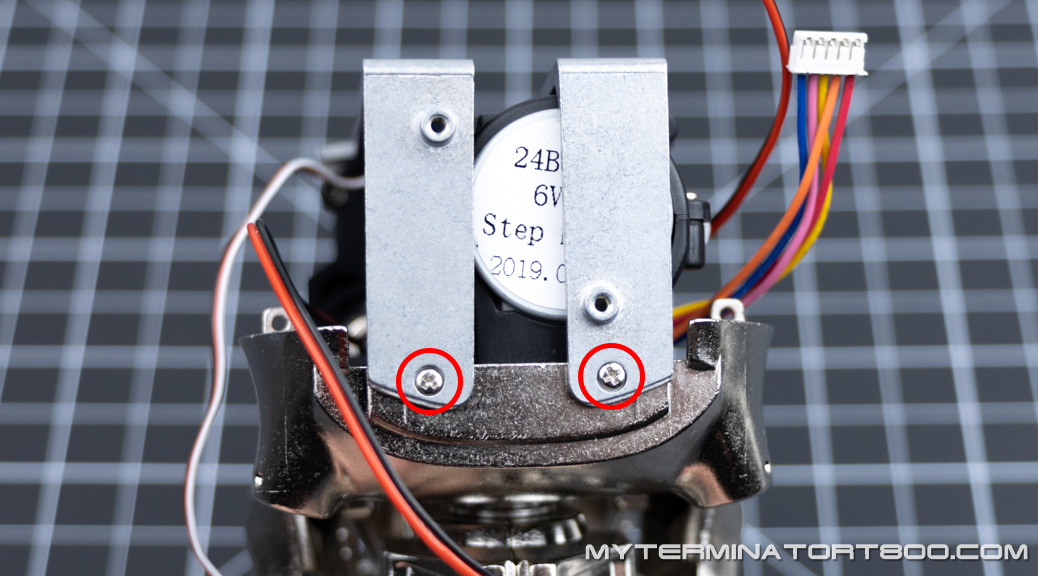 Remove these two screws holding the L-brackets to the eye socket plate and remove both brackets: 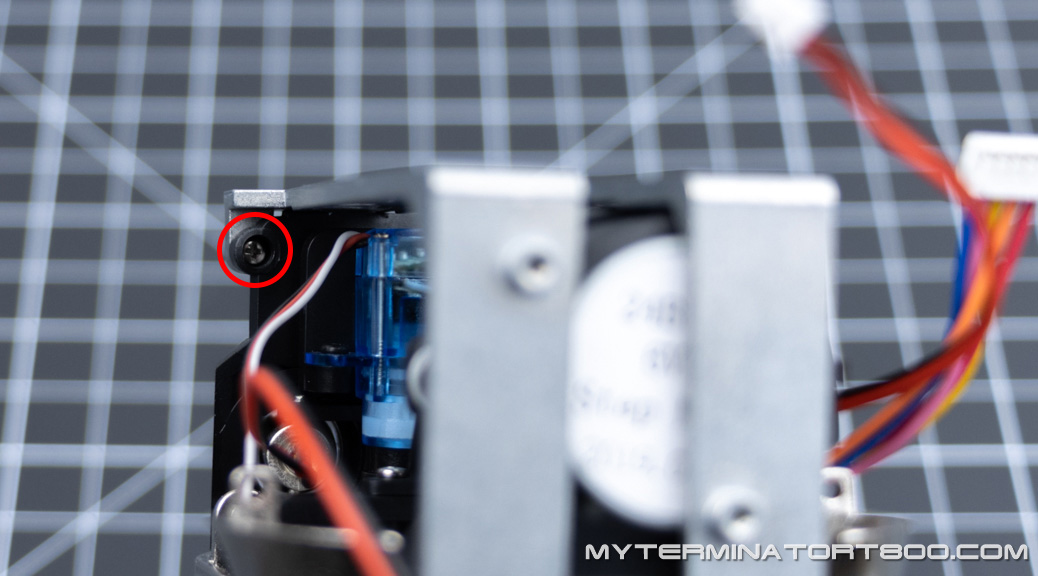 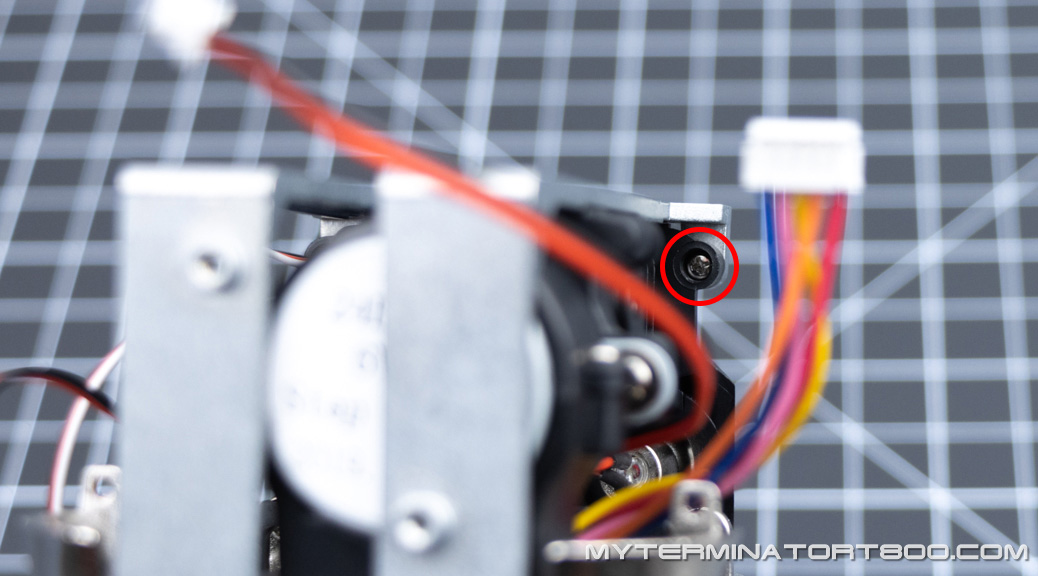 From below the jaw, remove these three screws to release the eye socket plate from the head: 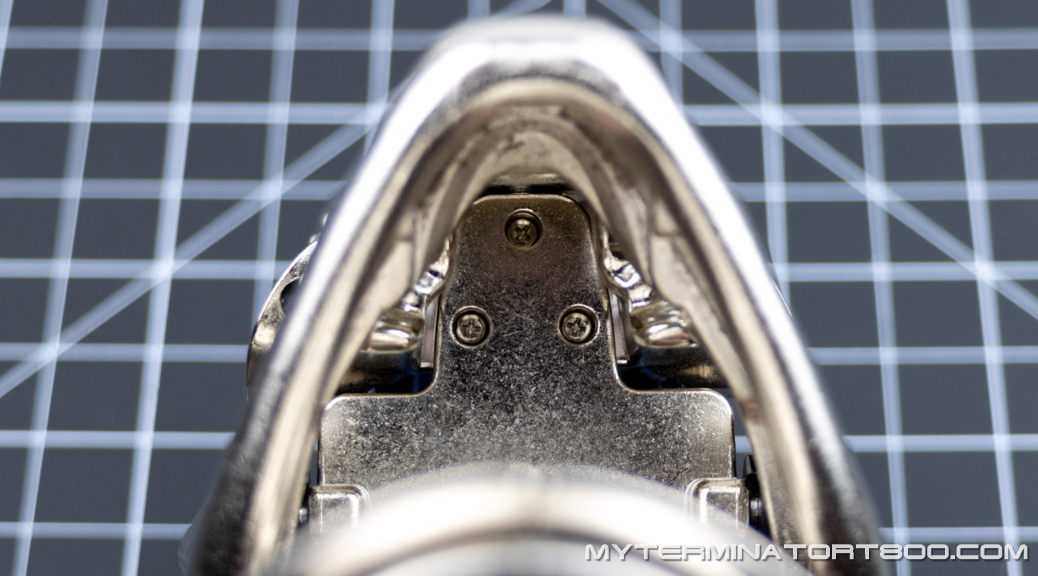 You can now slide the eye socket plate up (away from the neck). The small pistons attached to the jaw slide out easier if you completed Step 3: 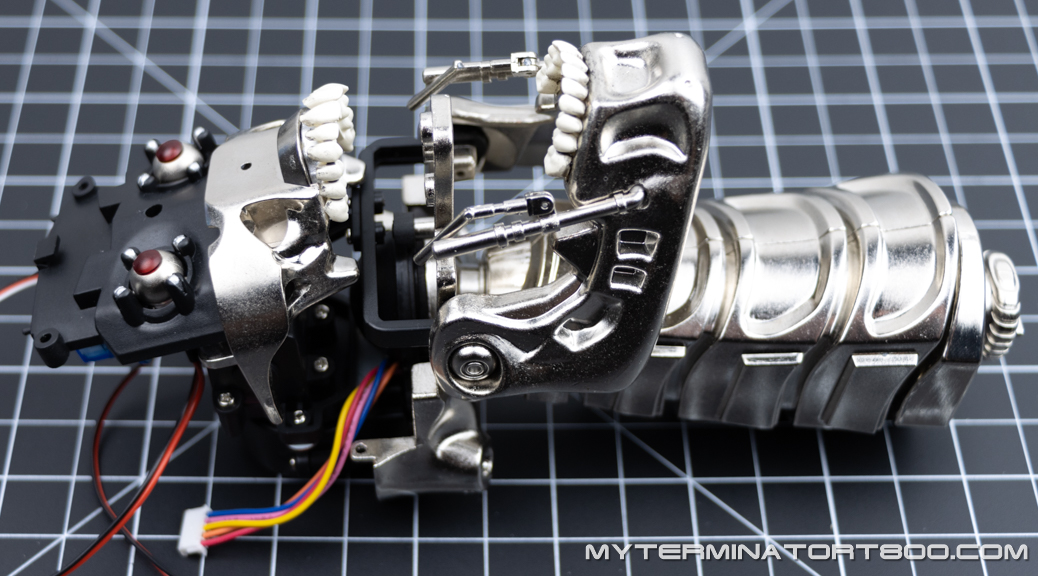 With the eye socket plate free, remove these two screws to get the Eye Motor out: 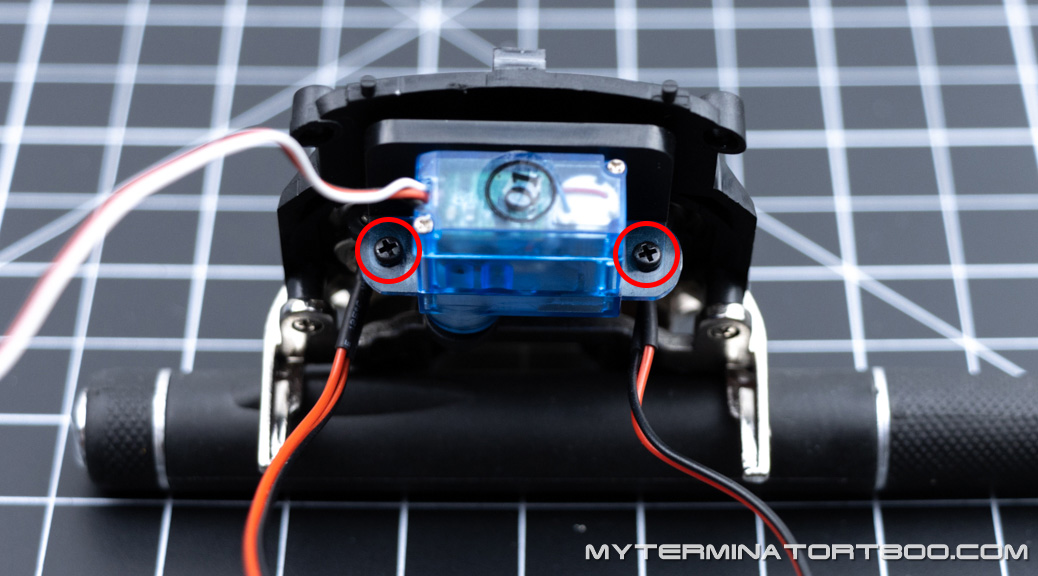 Followed by these two screw to remove the black plate: 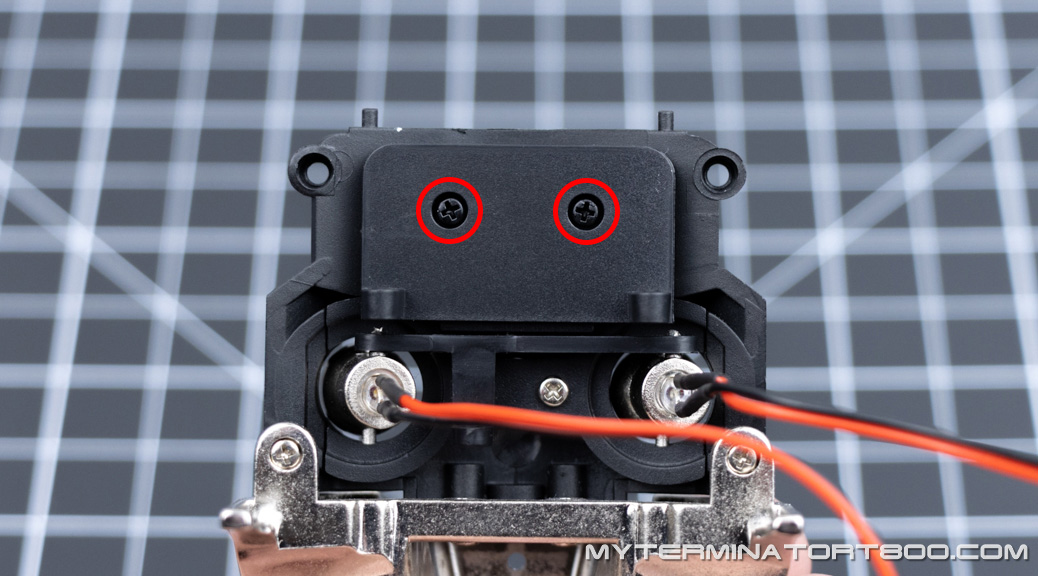 We can now carefully lift out the Head Connection Component A (which links the eyes together): 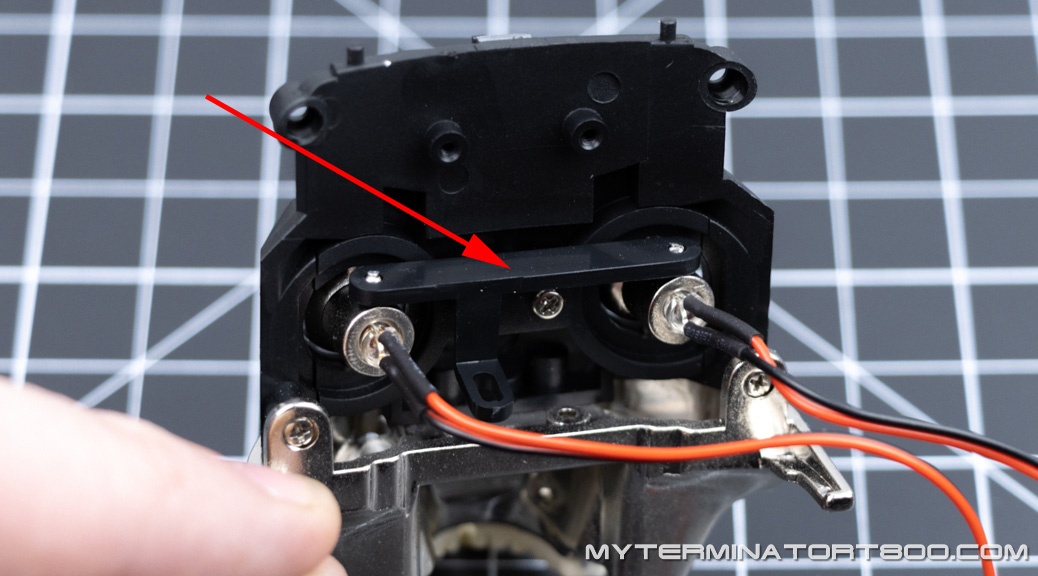 Lastly, we can remove these two screws and the rounded bracket which holds the original eyes in place: 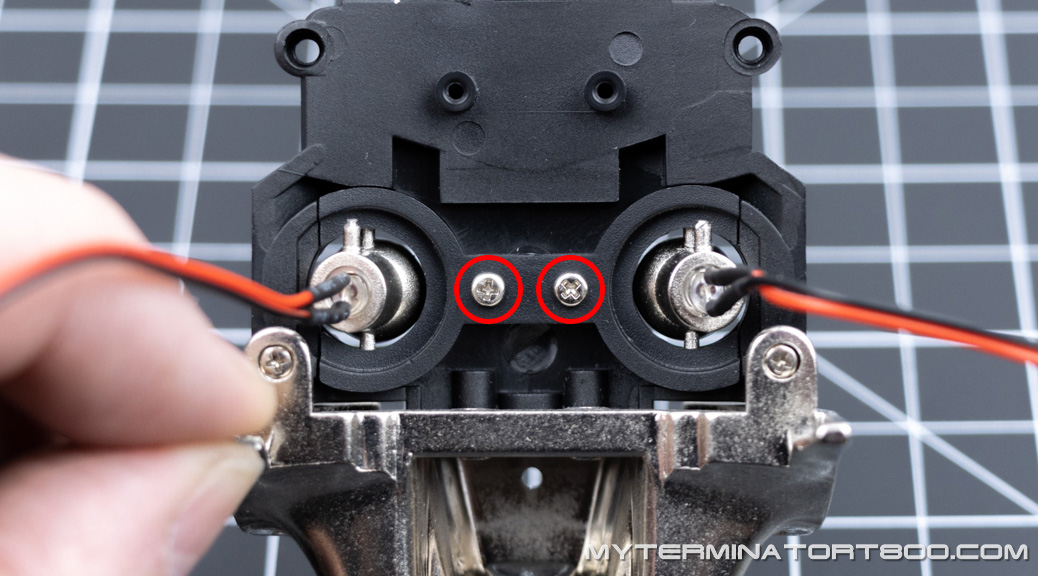 At this point, you will want to decide which lenses you want to use. After trying every possible combination, I decided to go with the red lenses ‘smooth-side’ out. I wanted the eyes to still be foreboding even when turned off and the color red has that effect. As for the mesh surface being internal, it is still visible when the LEDs are lit and it even gives the eyes a nice 3-D effect.

The lenses fit loosely into the new eye sockets, so you may want to use a little super glue here. I also aligned the surface of the lens to match the curvature of each eye ball. Since I am not using the clear lenses, they are just extra parts now: 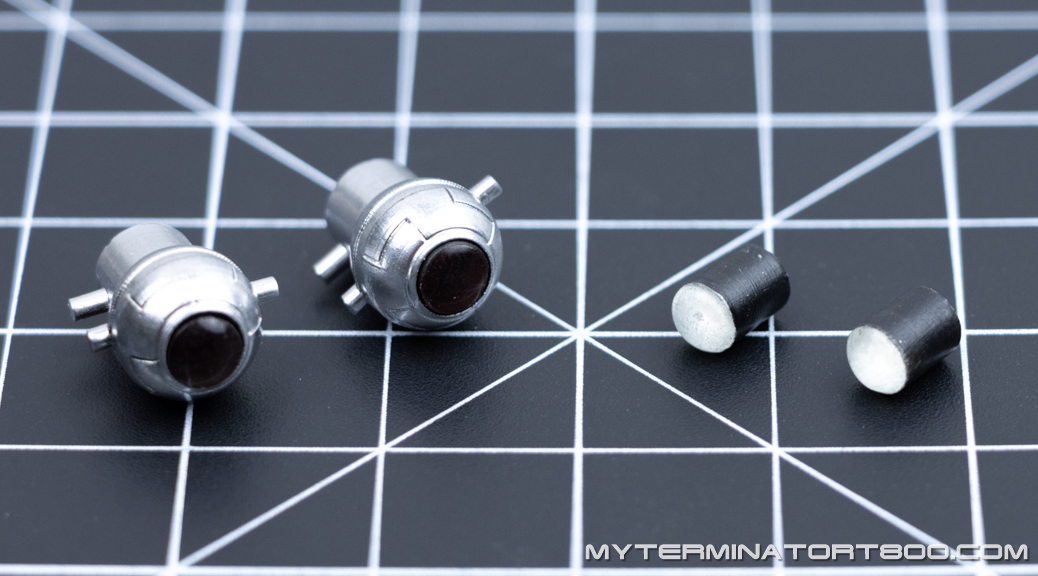 Now, we can start the reassembly process.

But wait! Since I had the eyeballs out anyway, I thought I would add a little more silver to the rings around the eye sockets. This is what I had before: 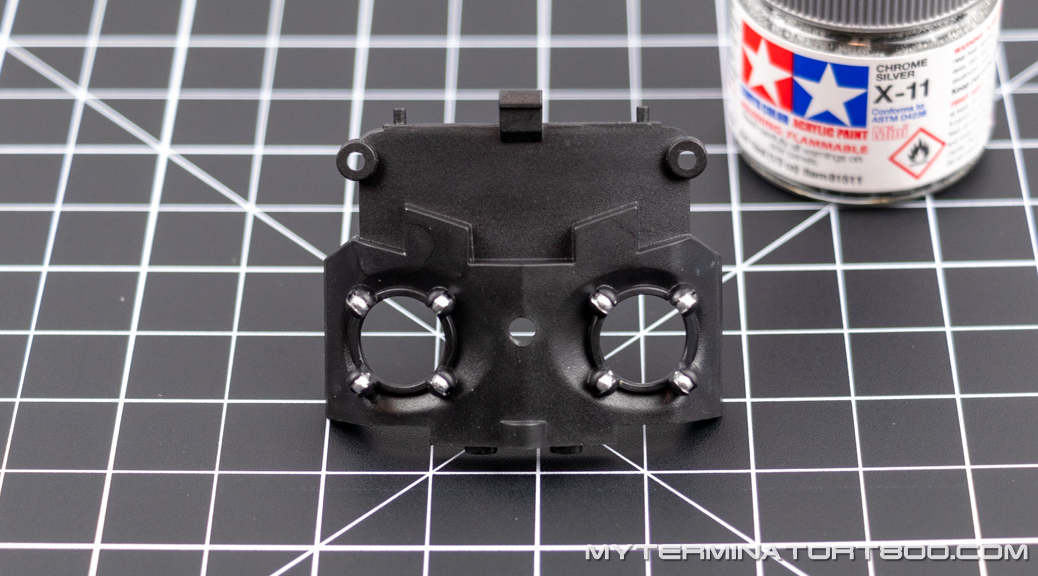 And now, after using a Metallic Silver Sharpie. I left just enough black on the clamps to give it some contrast: 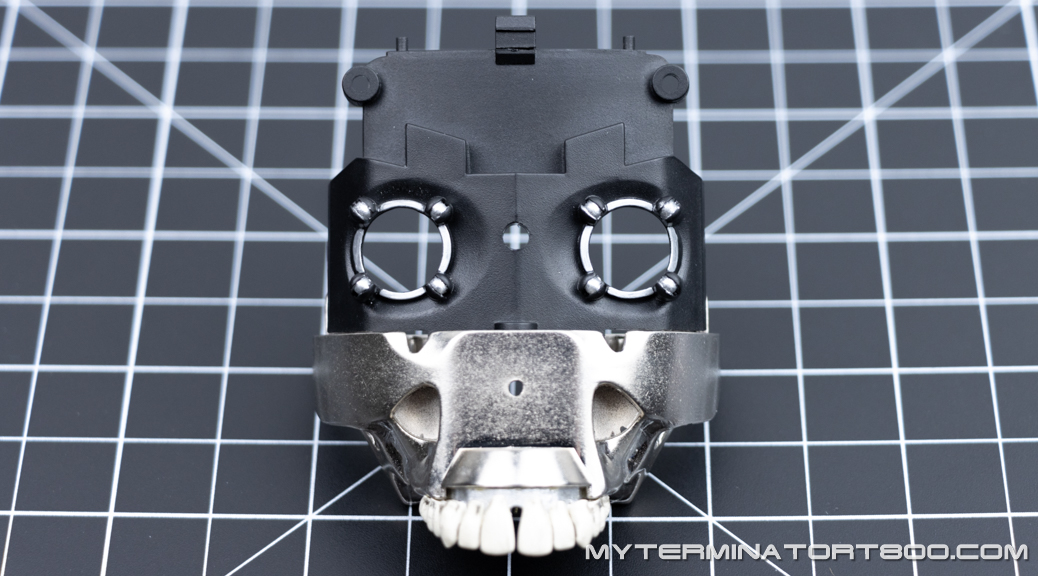 Fit your new Replacement Eyes into the eye socket plate just like the originals (with the rear pin facing up). Secure these into place with the circular bracket and the two screws: 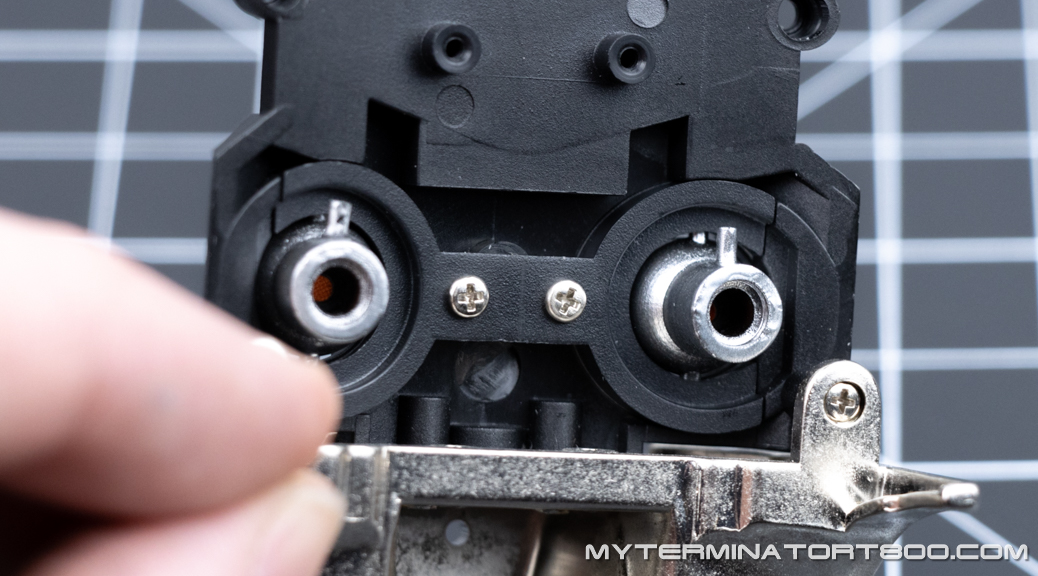 Fit the Head Connection Component A (which links the eyes together) over the rear pins of the new eyeballs. Secure the black plate to the eye socket plate with the two black screws.

CAUTION: While attempting this step I found the linkage did not fit easily, and while trying to work it in there, I ended up snapping one of the eyeball pins off! I panicked, but was able to reattach it with super glue: 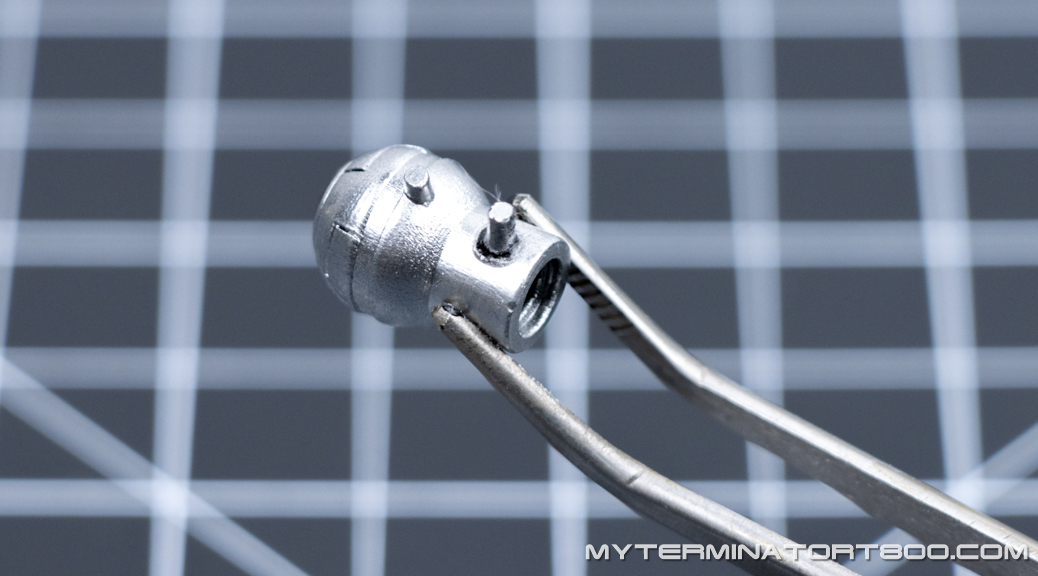 It is highly recommended (by myself and Model Modz) to drill out the two holes in this linkage (circled below) a little bit so it freely fits back onto the posts of the eyes. They are graciously sending me a replacement set, but it really was my mistake. Thank you guys! 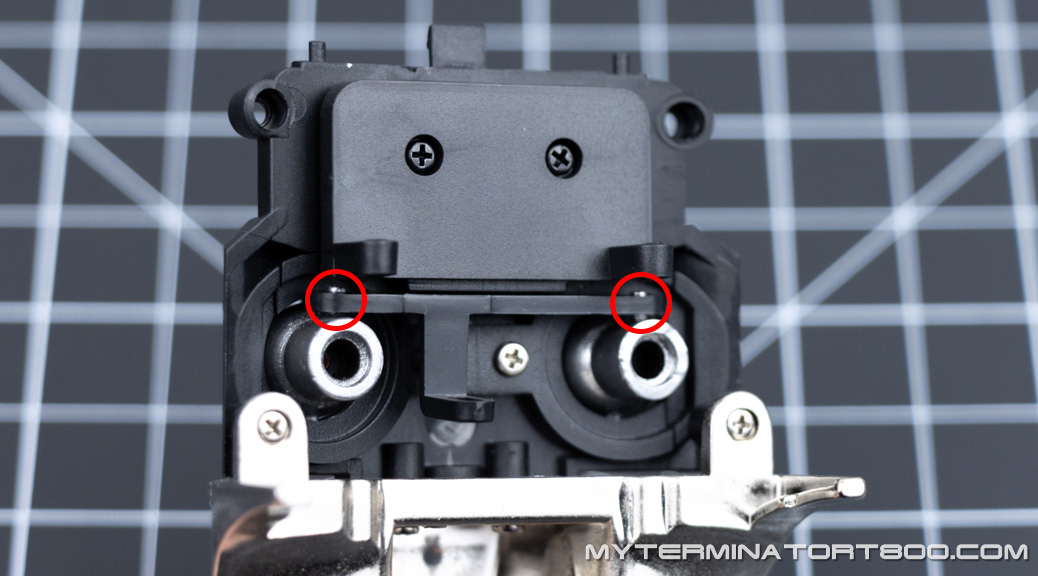 The front of the plate should look like this now. It already looks so much better: 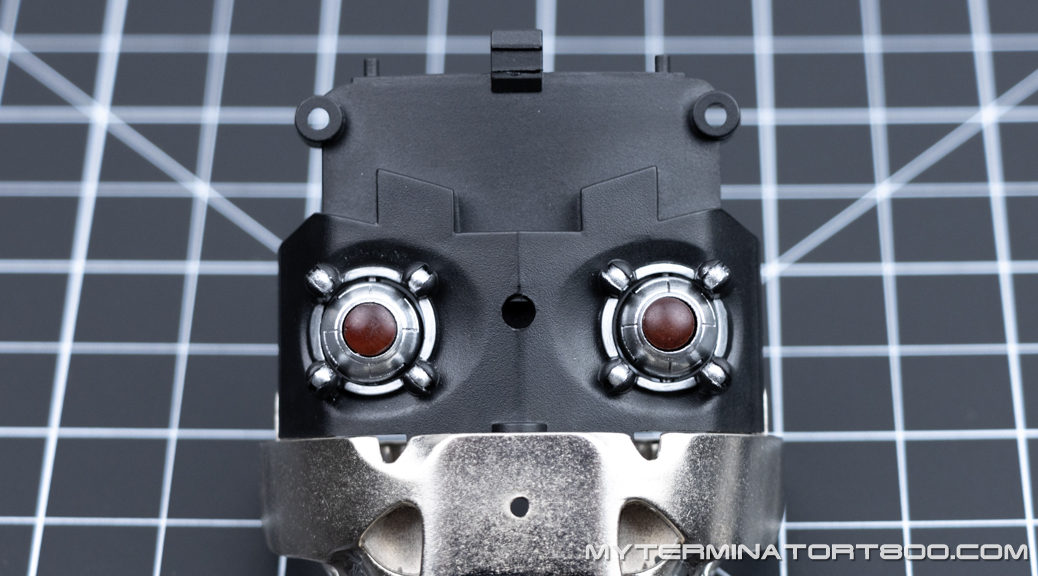 Gently pull the LEDs out of the back of the original eyes and use a small amount of super glue to mount them into the new eyes: 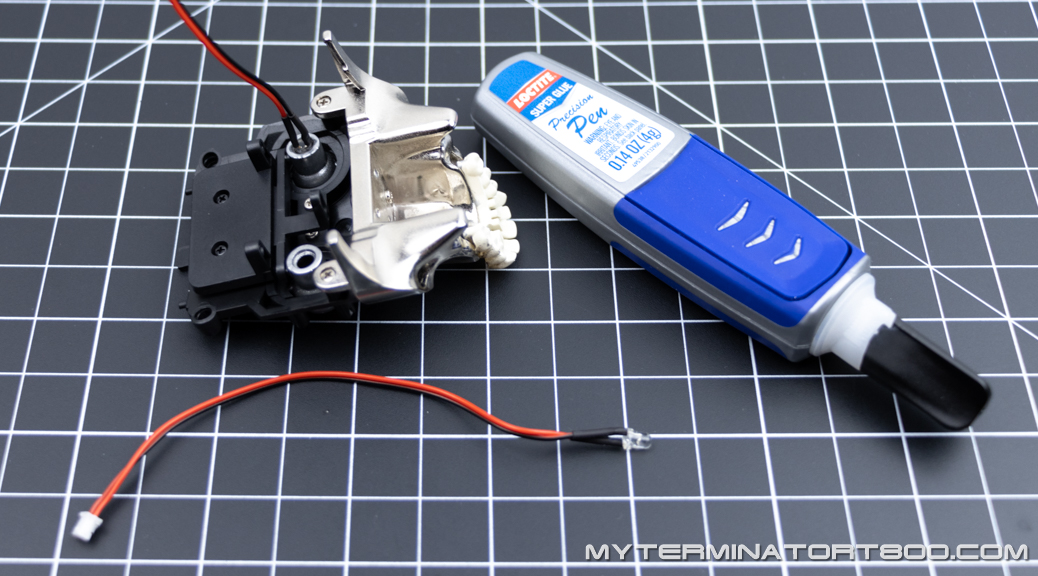 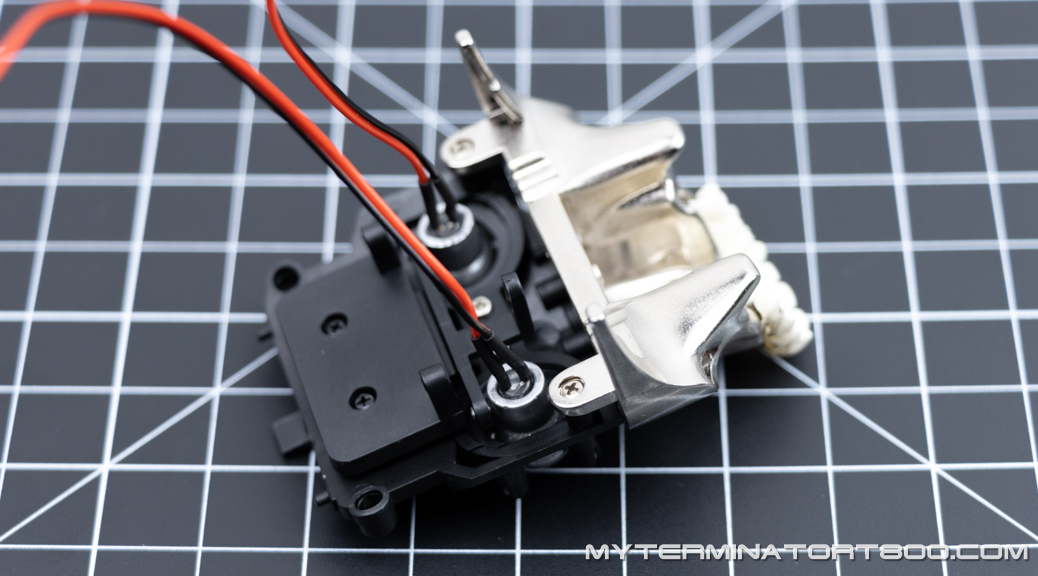 Reattach the Eye Motor, making sure the motor pin fits back into the slot of the linkage: 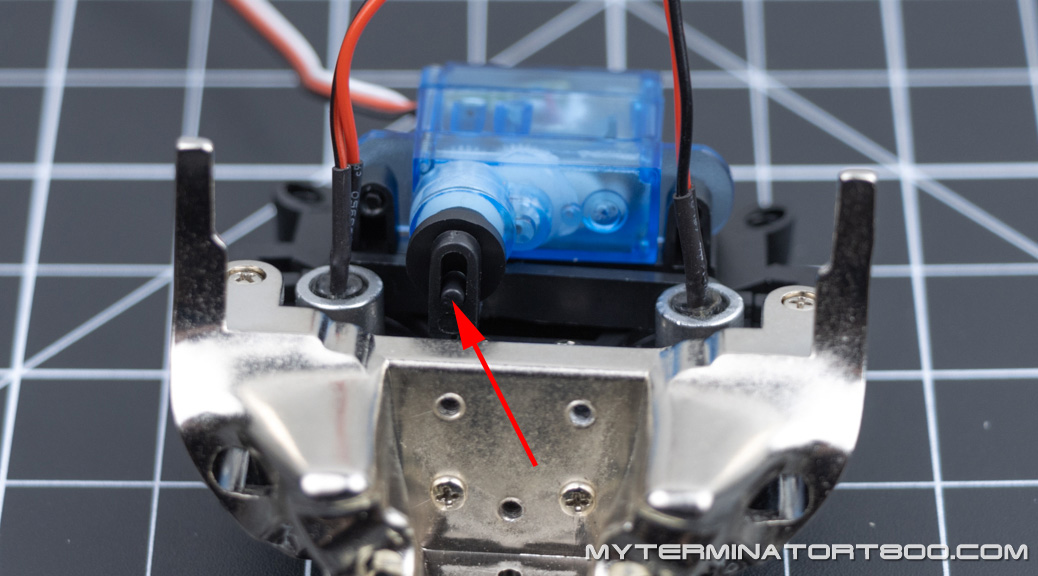 You can now rebuild the rest of the head by fitting all of the removed parts in reverse order. Make sure you fit the slot of the Head Motor Joint B back over the motor pin as you go:

And that’s it. I want to extend a huge thank you to Model Modz for all they do for the partwork community! It is little details like this that really bring these models to another level.

For comparison, I put this image together to show the before/after of this mod install (the after includes my additional silver paintwork): 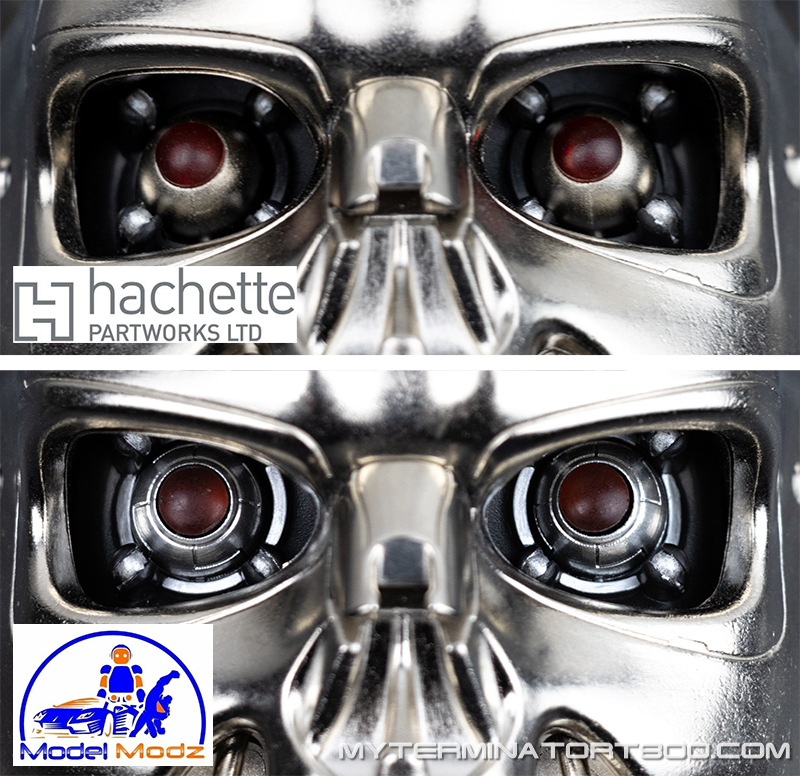 Finally, with both the Replacement Eyes and Replacement Teeth mods installed, my T-800 looks much more menacing. As they should be! 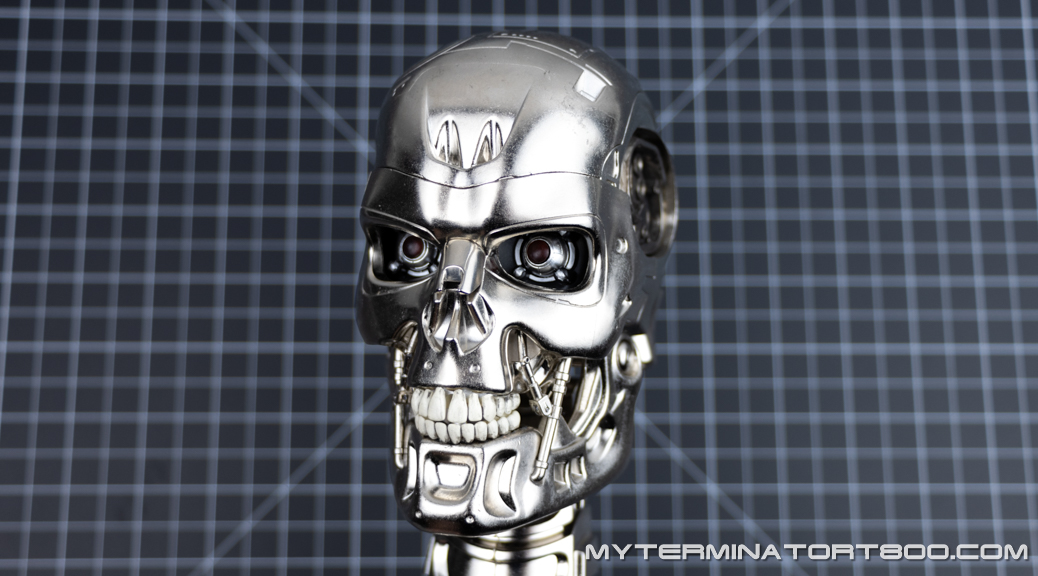