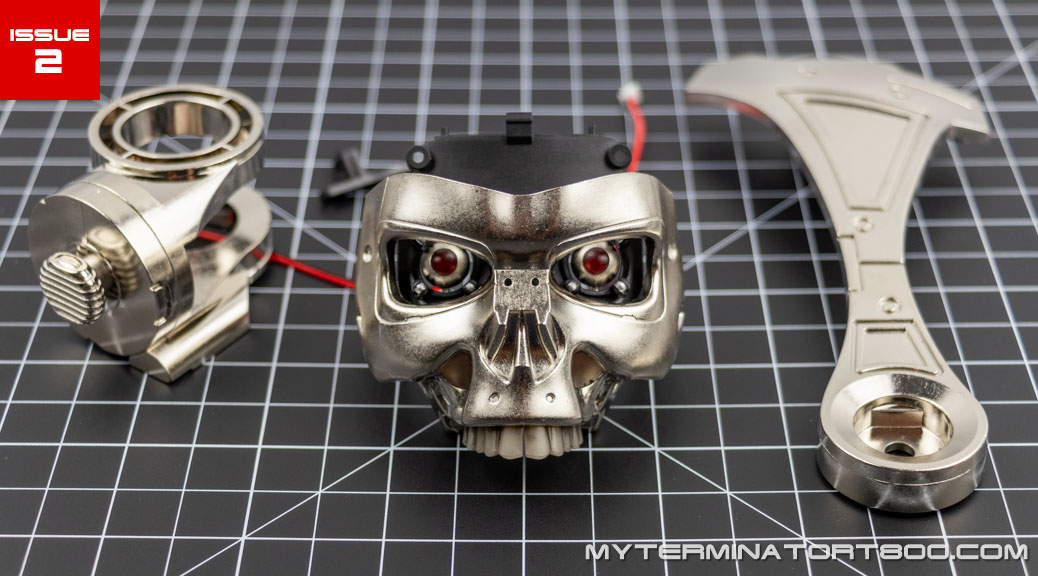 “For our second session, we’ll begin to assemble the Terminator T-800 Endoskeleton’s haunting, skeletal grin. We’ll start with the upper jaw area and teeth, and then put together the first segment of the right arm.” 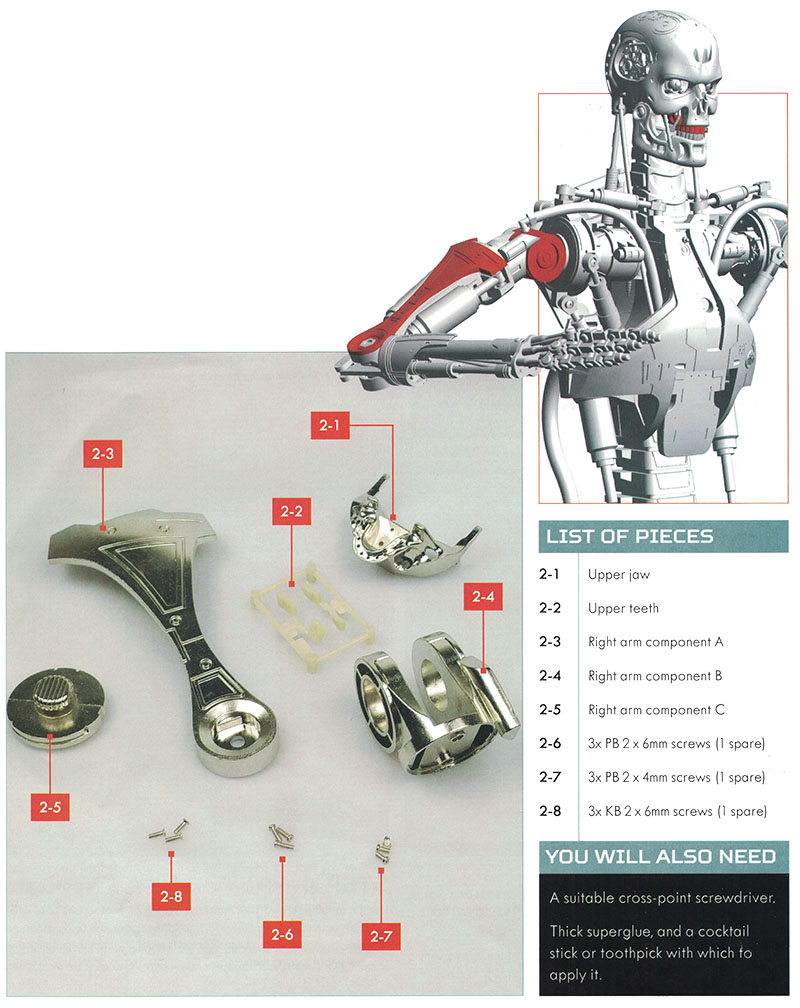 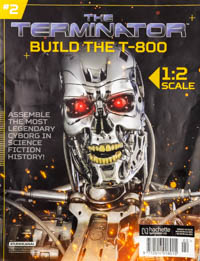 Components for the Head and Right Arm

Be sure you have all of the correct parts and they match what is listed in the magazine. We will not use the Right Arm Component A again until Issue 4, so put it safely aside for now: 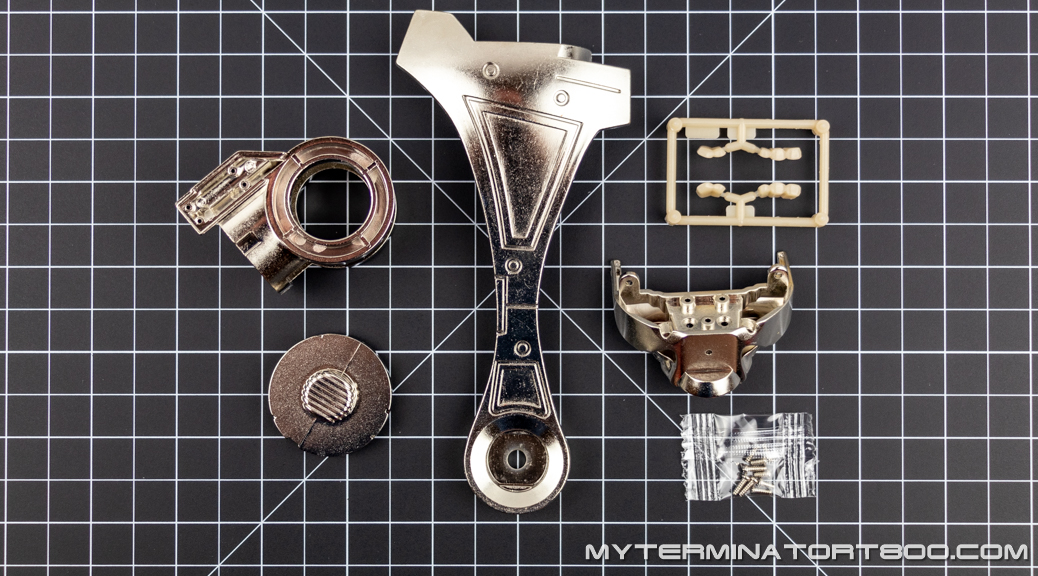 Also, take note of the different screw types. In the picture below, on the left is a KB countersunk screw. The others are the two sizes of PB pan head screws: 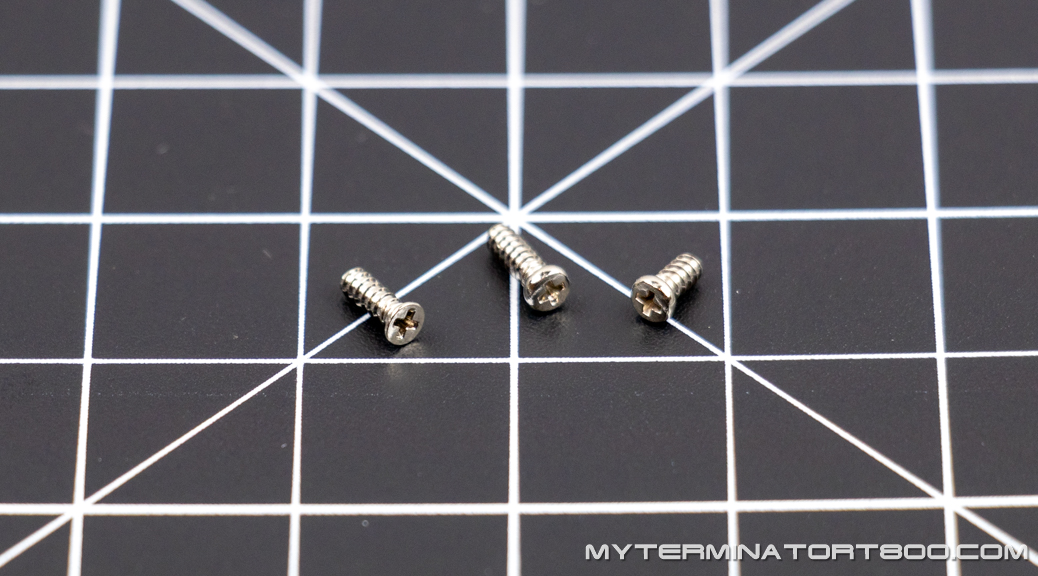 Insert the Upper Jaw into the Matte Black Inner Eye Sockets we completed in Issue 1. Line up the screw holes in the Upper Jaw: 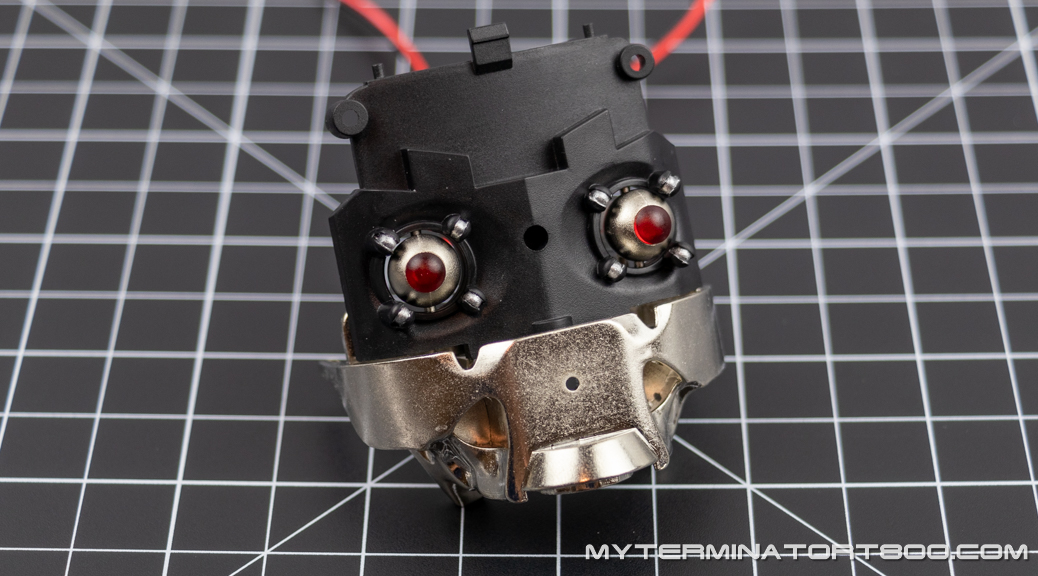 Make sure the LED wires are not in the way and fasten these parts together with two (2) PB 2 x 6 mm screws: 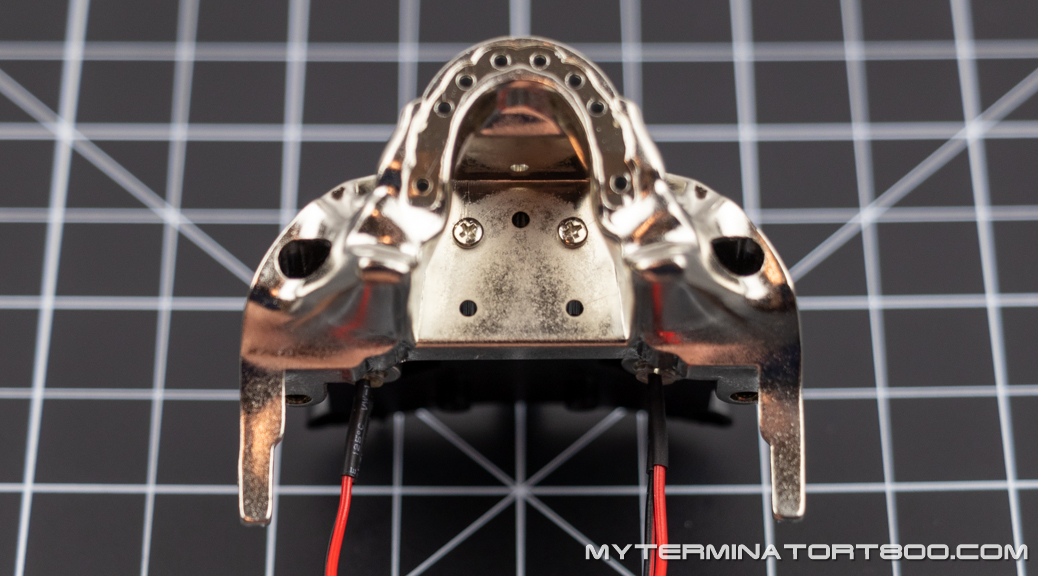 You may notice that the Chrome Eye Orbits have the third pin facing up and the Head Connection Component A (part 1-7) is installed already. This is because Hachette’s instructions were wrong back in Issue 1 and did not get corrected until Issue 18, but I had already fixed it here: 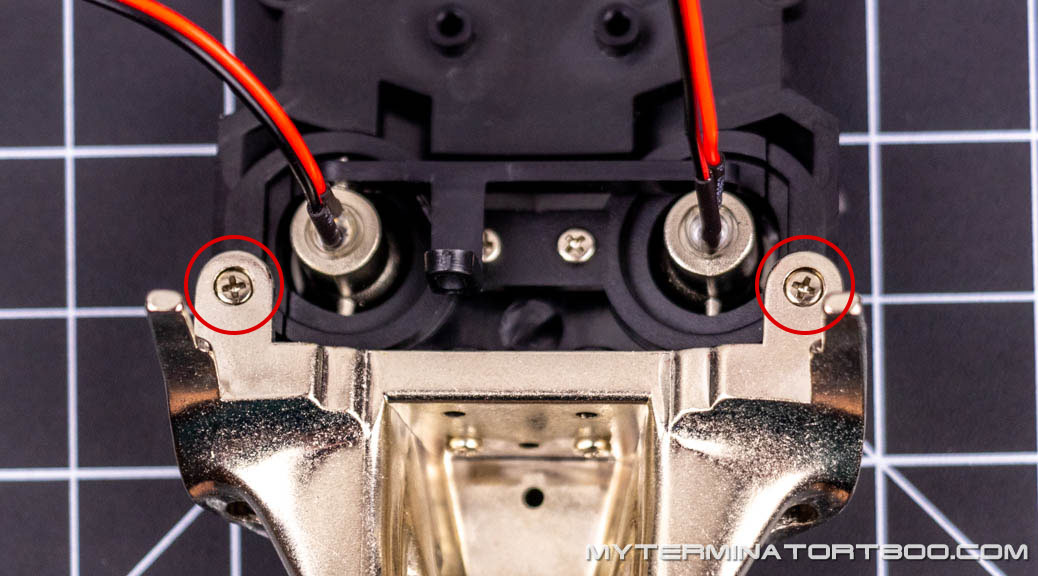 The Upper Teeth come attached to a sprue. Take note of the part numbers as each one is different. Remove them with a sprue cutters or a sharp knife and sand down any rough edges.

The teeth supplied with the model did not look natural to me. I used the soot color from my Tamiya Weathering Master B to give them some grime. These weathering powders are applied with a sponge and slowly add color to the part. I paid extra attention to the roots and spaces between the teeth as I would clean them up at the end of the issue: 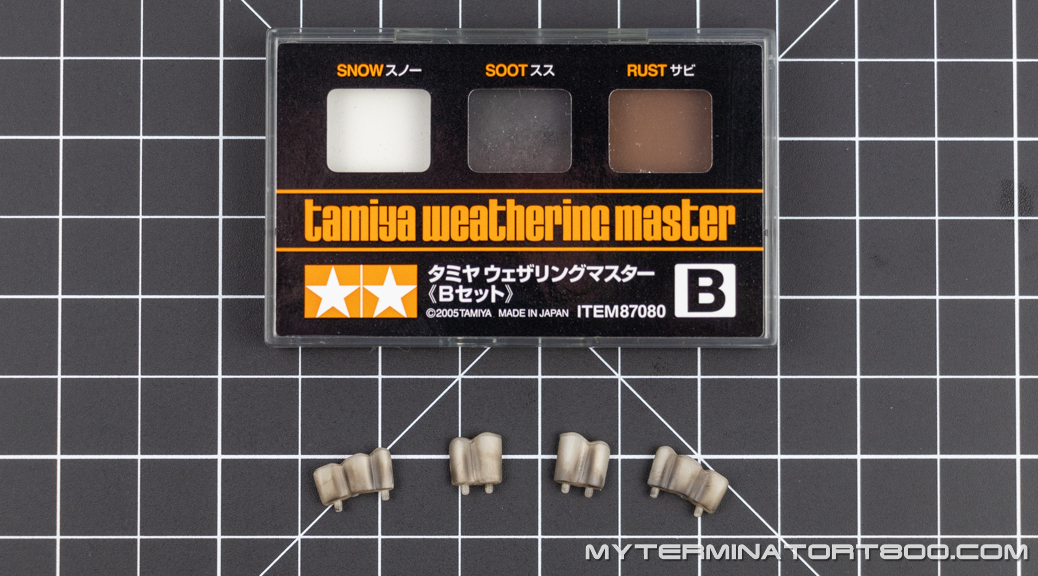 While installing these, I purposely left a gap between the two front teeth, just like Schwarzenegger. After they were glued into place, I lightly rubbed my fingers along the faces of the teeth to wipe away some of the weathering powder and this resulted in a more realistic look: 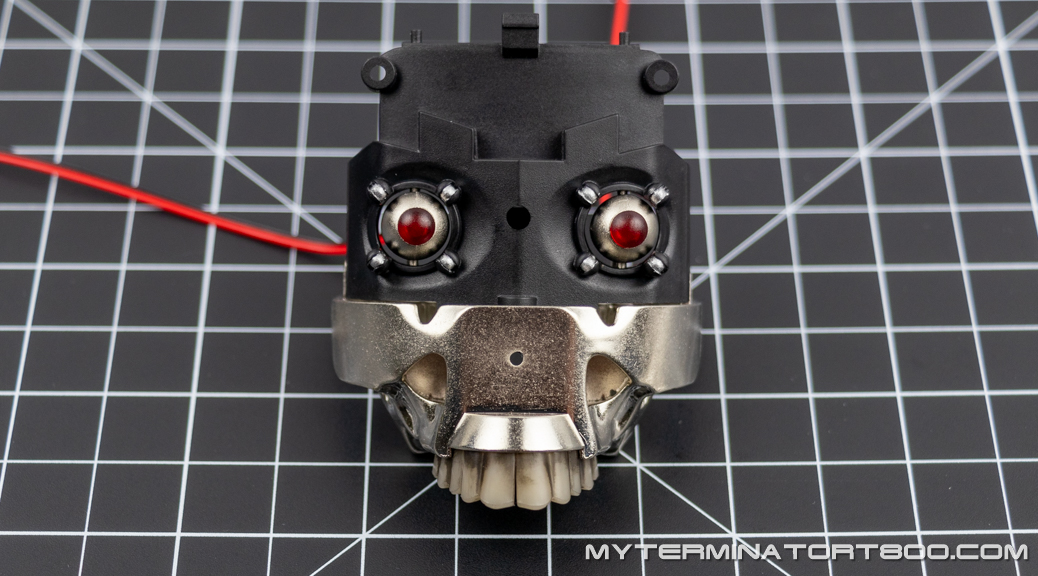 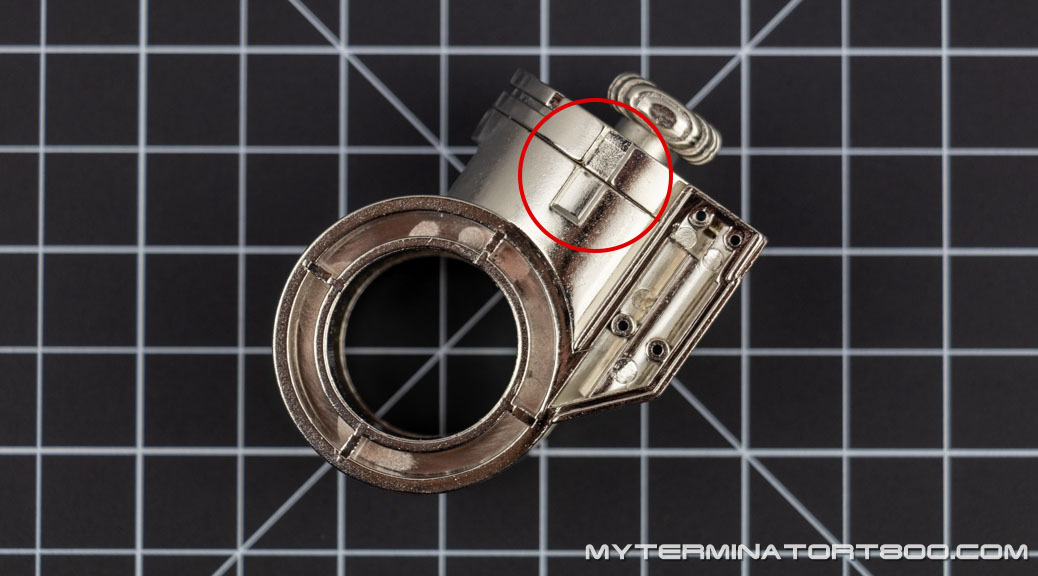 These are the countersink screws and should sit flush. Keep this assembly safe as it will not be used again until Issue 4: 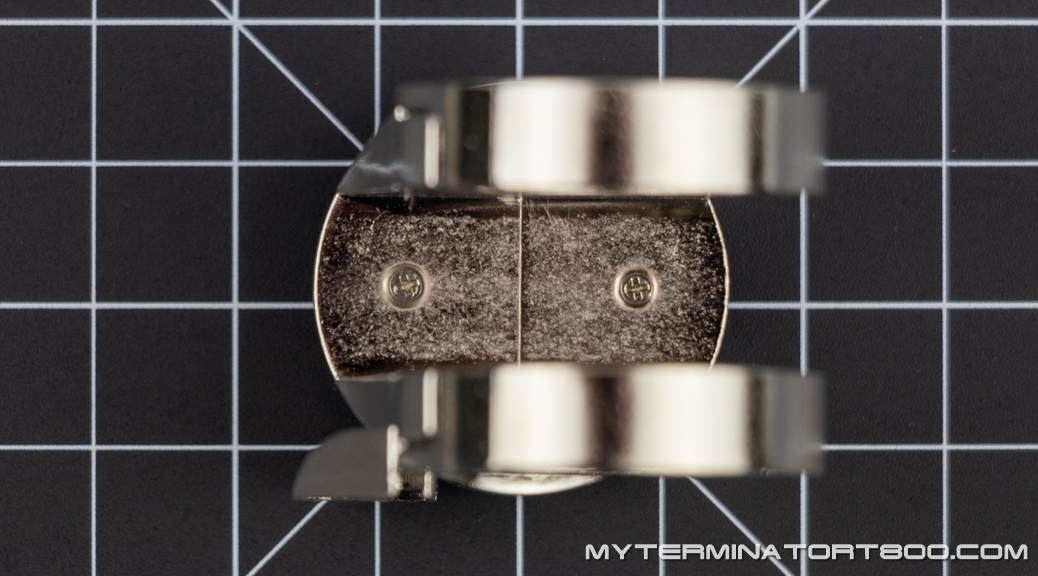 Long after I completed this article (around Issue 34), I got my hands on the Replacement Teeth mod from Model Modz and installed them. I also added some weathering, and both together made a huge difference. Check out the install HERE! 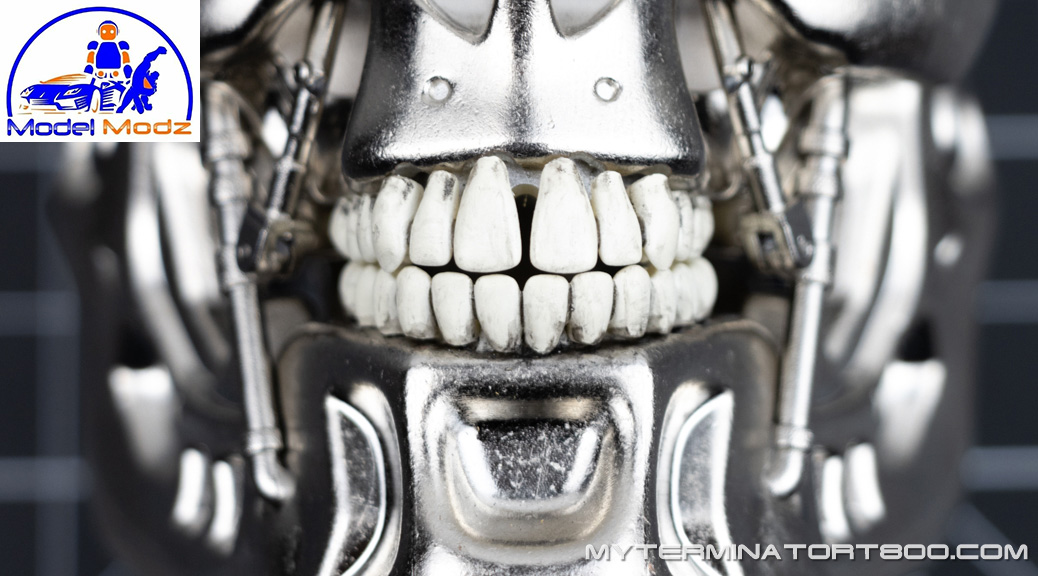 I am really surprised at the quality of the teeth as I would have expected them to be more true to the real endoskeleton, but I don’t mind adding a little detail here and there. The only metal parts in this issue are the Upper Jaw and Right Arm Component A; the rest is plastic. Keep all of these parts safe until later issues. This is what we have built up so far (the face plate is temporarily installed for the picture):