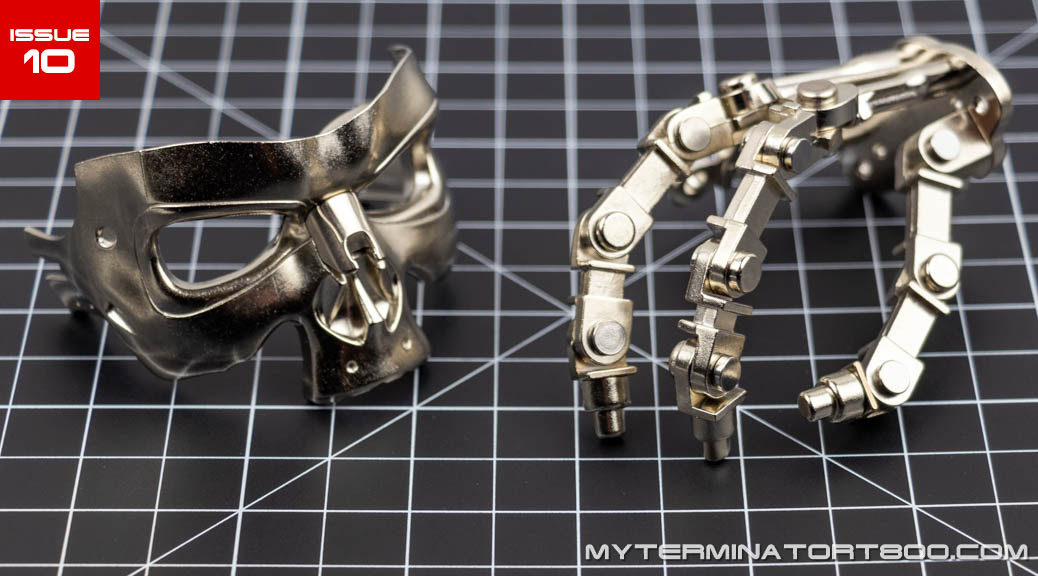 “In this issue, you’ll add to the interior of the skull, and construct another finger for the right hand.”

This includes the right middle finger and the eye sockets. 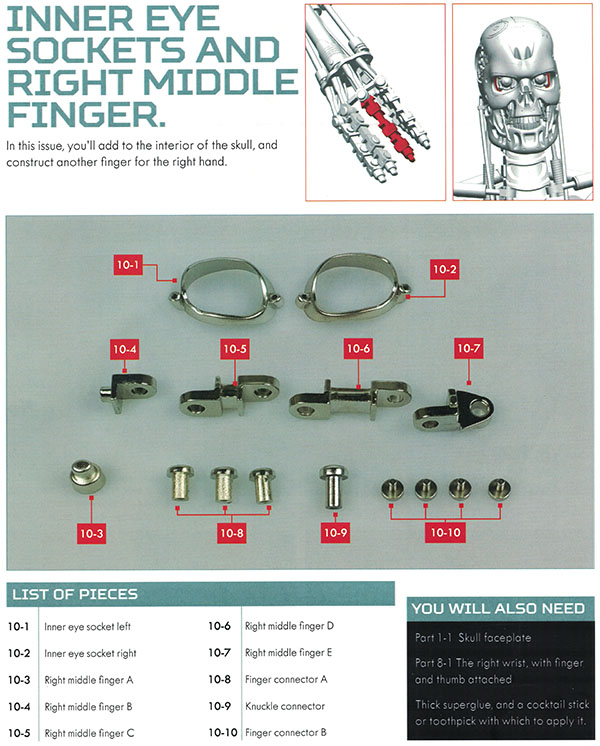 Materials: The Right Middle Finger parts (except 10-3) and Finger Connector B parts are metal, but the rest is plastic. 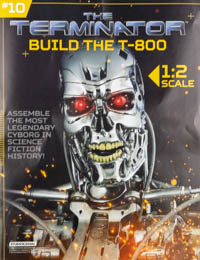 Find your Chrome Eye and Nasal Sockets (faceplate) last worked on in Issue 6, and the Inner Eye Socket Left and Right: 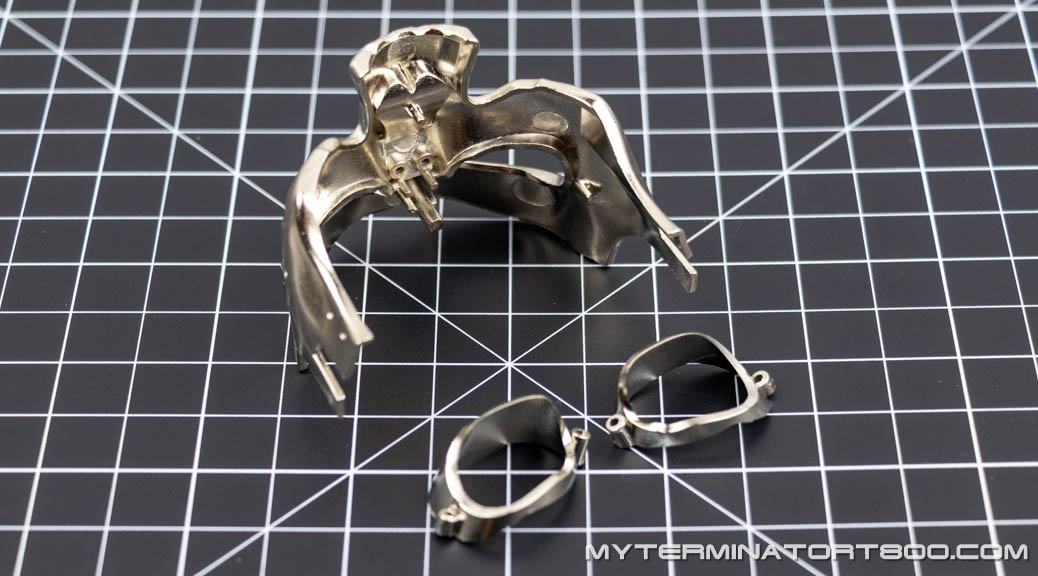 The inside of the faceplate has locating pins on either side of the eye holes (circled in red below). The Inner Eye Sockets will cover these pins and will only sit flush if the correct side matches up. Push the Inner Eye Socket Right onto these until flush. If it remains loose, a little drop of super glue on each pin helps: 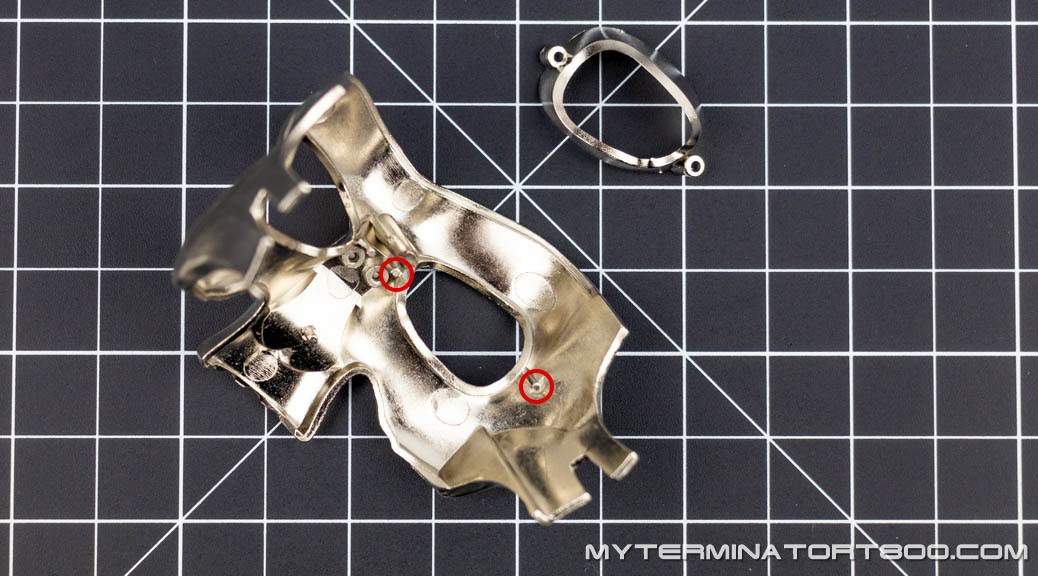 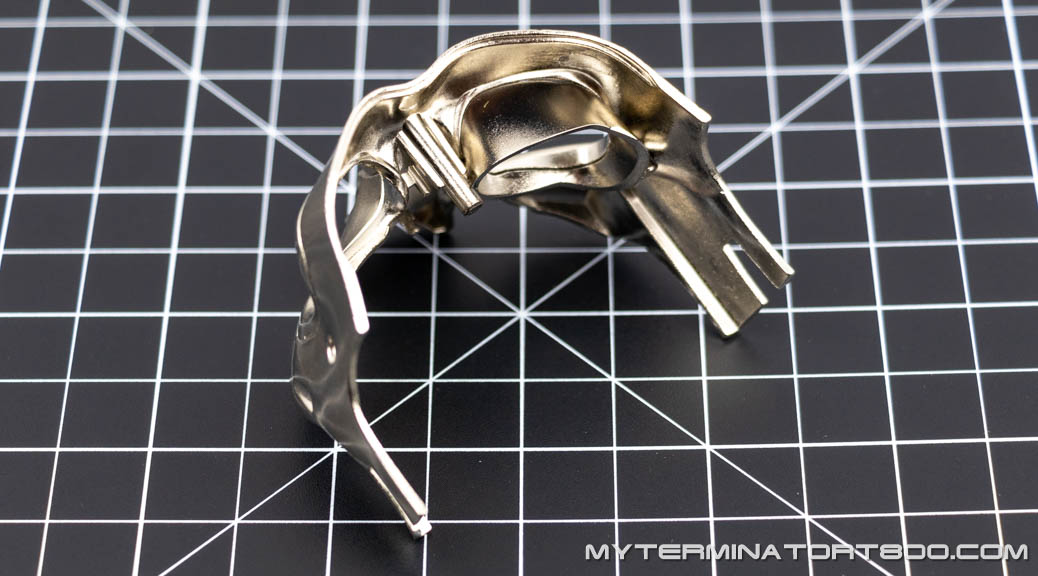 Repeat Step 3 for the Inner Eye Socket Left. Keep the faceplate safe until we use it again in a later issue: 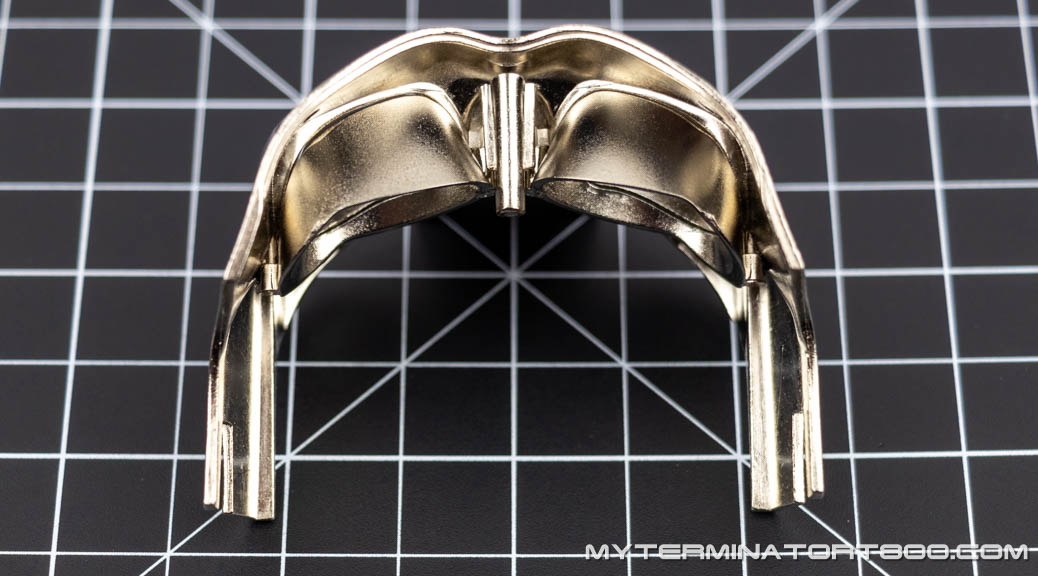 As before, I had to use a little drop of super glue to keep the fingertip on. Also, I took note of the fact that three of the bushings are smaller than the last one. These smaller ones are for the finger joints. The larger one will be used in Steps 12-13 to attach the hand to the palm: 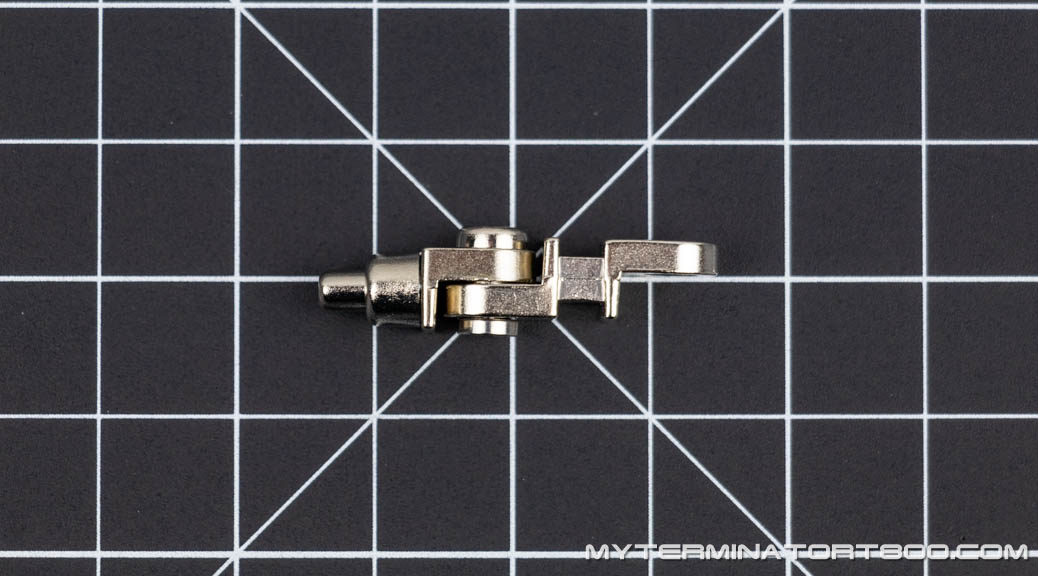 Now attach the Right Middle Finger D (proximal phalanx) to the assembly using another bushing and pin, but from the opposite direction: 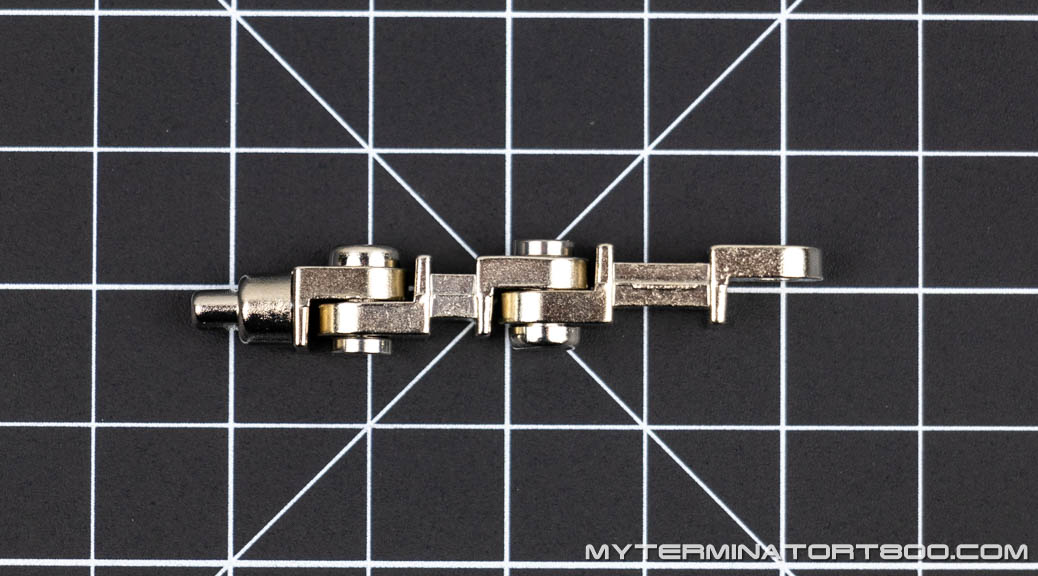 And finally, add the Right Middle Finger E to the first two joints as shown. Again, switch the direction of the bushing/pin: 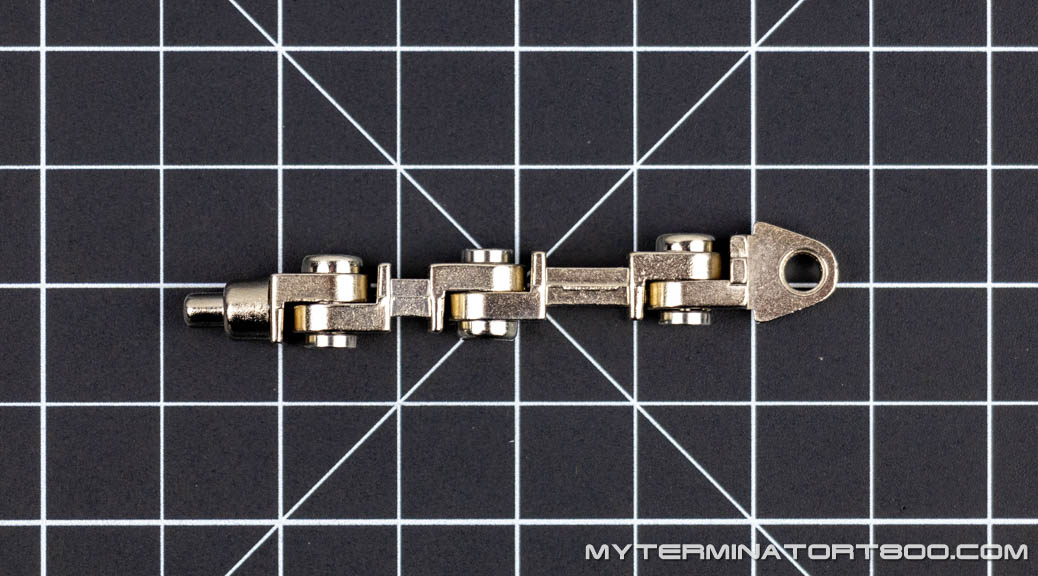 Another loose knuckle joint here. You can actually see in the image above that the pin is not fully seated. And, this was after I put nearly all my weight on it. Time to break out my craft vise again to fix this right up: 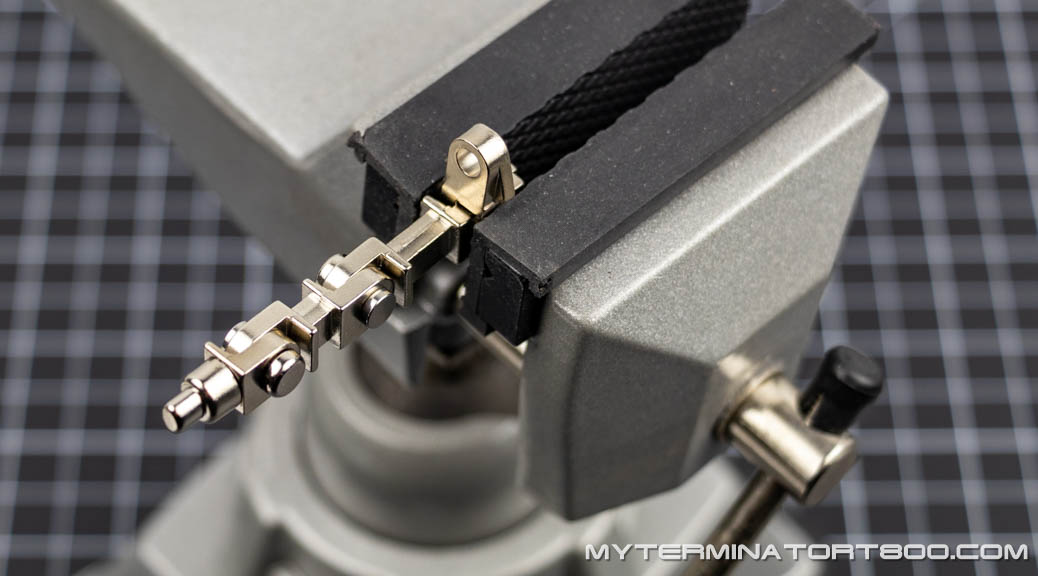 Moving on, we will need the Right Palm assembly from Issue 8, the larger Knuckle Connector, and the final Finger Connector B (pin). Attach this new middle finger next to the index finger from before. The pin should be on the palm side: 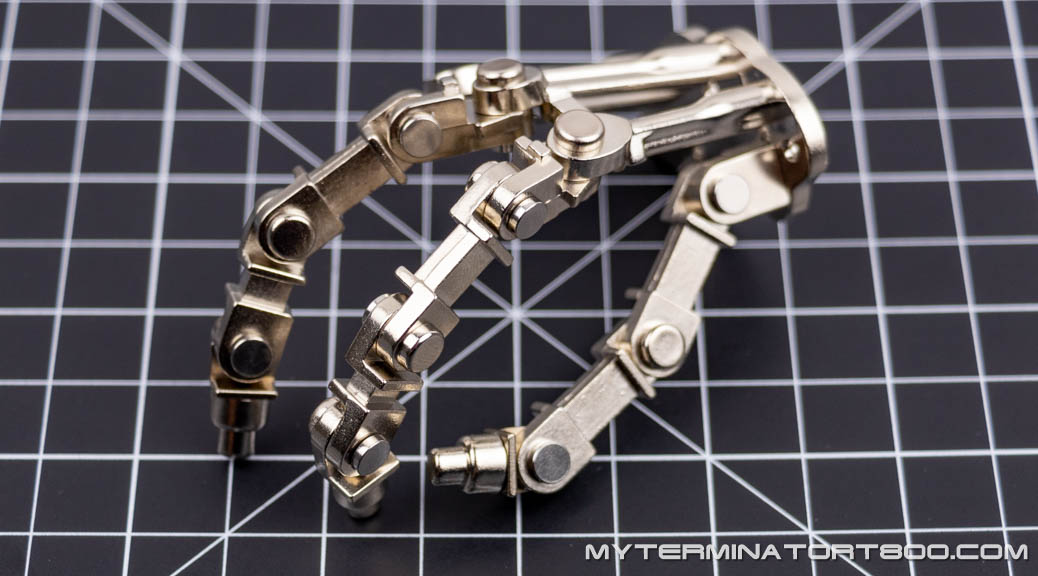 We are almost done with the right hand and the skull gets a little more detail. The next finger arrives with Issue 13, but we will not need this hand until Issue 14.